It’s been a long weekend at work this weekend – the horrible and sad story of a murder in Gloucester broke last night, and it’s kept me busy ever since.

It’s been a tiring one, but before I go to bed, I wanted to show my neglected blog some love and post a quick snapshot of my current works in progress. Not a lot of progress has been made this week, what with the hot weather, a busy time at work and lots of running… But things are still ticking over.

I have now hand-quilted half of the quilt I’ve made. It’s just simple running stitch along the joins between the patchwork squares, so it’s pretty simple and relaxing to do. Only trouble is, after a fairly short period of stitching, I get far too warm having a quilt across my lap and have to stop.

I’ve also started the body of the Gruffalo I’ve been commissioned to make. But with the hot and sticky weather, progress is slow. It looks like being cooler this week so I’m hoping to have him finished by the end of my day off work on Wednesday.

I have also had a whole stack of new shades of Schoeller and Stahl Record 210 cotton delivered for my next commissions and for doing a few new designs just for myself and just for the fun of doing them. I’m looking forward to new challenges again… when I eventually get there.

It’s been a few days since my last post. A good few days during which I have been off work and out and about enjoying the sunshine. I haven’t picked up my crochet hook in a week or so because I just get frustrated trying to crochet in this heat.

Instead of crochet, I have been doing another therapeutic and stress-busting hobby that’s not easy in hot weather – running. I started running in March after several years of very poor health. It took a very gradual walk-run programme to get me up to running for any length of time, but now I really enjoy it. And I’m much healthier.

On Sunday, my other half and I took part in the National Lottery Anniversary Run at the Olympic Park in London, ending with a lap of the track inside the Olympic Stadium. It was five miles – not exactly a marathon, but definitely a milestone for me. I got round in 51 minutes and loved every second of it. Next stop will be a 10k, and after that, who knows… 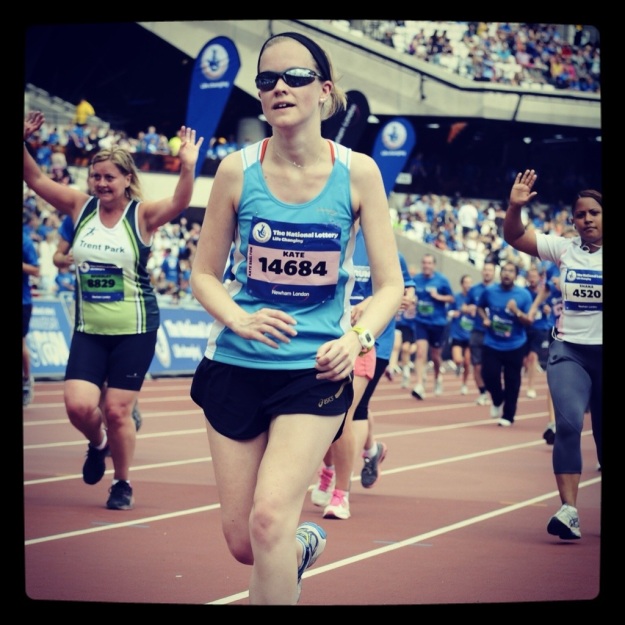 In between running and resting, and spending time with my family who are on holiday down here in the sunny South West, I have been making progress on my quilt. When I was simply using my sewing machine to join all the patches, it was a much cooler job than crochet, cotton being much easier to handle than thick yarn. But when the pieces were all joined, I moved on to basting it (with thanks to my friend Sarah for the good advice on using spray adhesive) and I’m now hand-quilting it. Not exactly a job for hot weather, since it essentially involves sitting with a double quilt across my lap, but I’m stubbornly sticking to it and making quicker progress than I expected. And, like running, sitting here doing lovely straight rows of simple running stitch is strangely therapeutic and stress-relieving.

It looks like the weather may take a turn for the cooler these next few days, so hopefully some crochet news to report soon.

Today I decided to admit defeat and accept it is too hot for crocheting. So I went back to my half done patchwork quilt instead. Cotton is so much easier to handle than thick yarn in this weather.

Today is my first of six days off work, so I had bags of time (much of which I spent in town getting really frustrated with the total lack of non-pink, non-shiny, non-skintight, non-stretchy running tops for girls – but that’s a whole other blogpost which I may or may not write another day). When I did finally sit down at the sewing machine, I kept at it until I had stitched together all my squares. Just border and backing to go… And then the quilting itself. 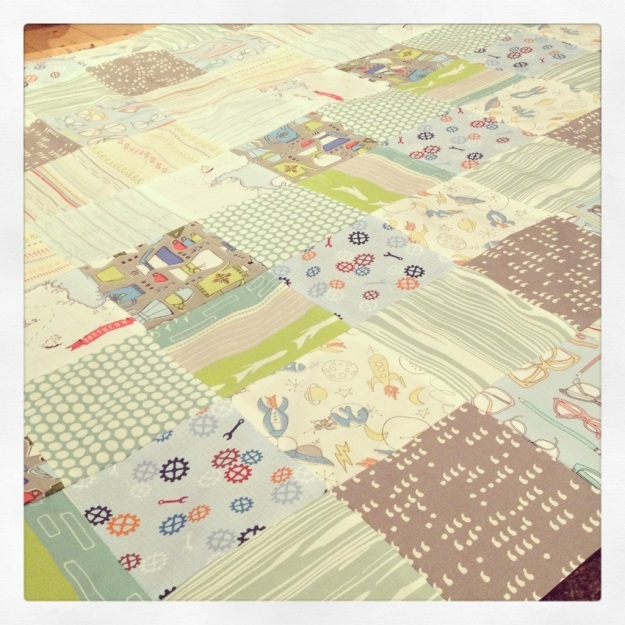 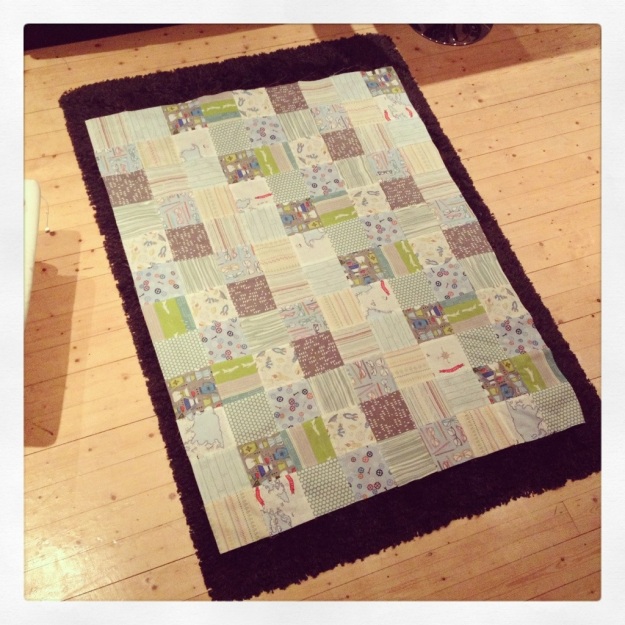 The unseasonably hot British summer is definitely not conducive to getting lots of crochet done. Sticky fingers and yarn and fiddly bits of felt and needles do not make a good combination. Throw a very busy couple of days at work into the mix and preparing for this weekend’s five-mile run in London (in the Olympic park, no less), and progress on my current project has been slow.

However, the Gruffalo now has a complete head, with ears and horns, and I’m looking forward to getting started on the body. I just wish it would cool down a bit first…! 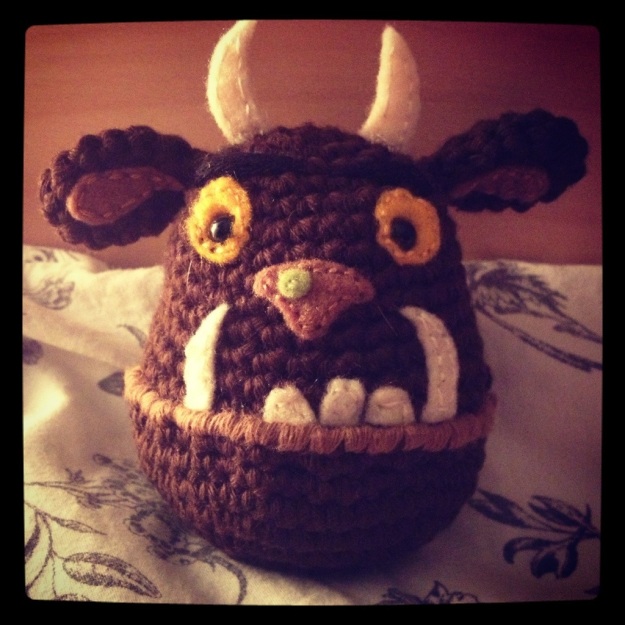 With my secret project out of the way (more on that in a couple of months), this weekend I got on to my next commission. A good friend of mine asked me to make a Gruffalo for his nephew.

My nephew is also a big fan of the Gruffalo, so I was already pretty familiar with him… But I was looking forward to creating my own version with a certain amount of trepidation.

I haven’t tried to recreate an existing character since the Octonauts I made for my nephew a few months ago (unless you count Macho Man Randy Savage of course, but that was a whole different thing). It’s not easy making something that looks dead right and doesn’t look like a rubbish imitation.

But I’ve made a good start on this one, I think – after having to resist the urge to start all over again a couple of times, I’m glad I stuck with it. He is only a head and a face so far – and still needs ears and horns, but it’s looking OK. Here he is with a comparison pic for anyone not familiar with the Gruffalo! 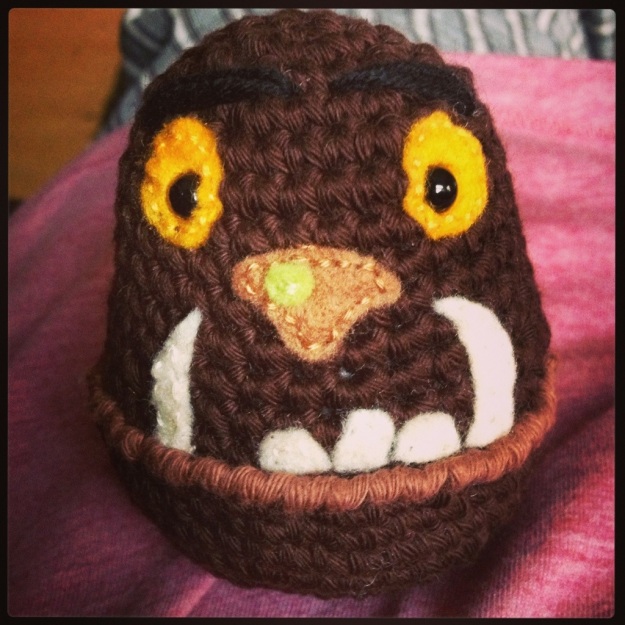 Since it’s my day off, I can finally get to the post office to send these little lovelies off via special delivery. They’ve been commissioned as a gift by someone who’s currently travelling the world, so I’ve wrapped them and tagged them and I’m sending them direct. I hope their new owner likes them.

I’ve been a bit quiet on the blogging front these past few days, for two main reasons. Firstly, I’ve just got to the end of nine straight days at work and have been a little on the tired side. Secondly, my current crochet design needs to be kept under wraps, so I’ve had no pictures to share on the occasions when I have managed to get my hook out for a bit. However, normal service will soon be resumed – tomorrow is my day off, so I fully intend to catch up and finish this project, then move on to something I can share. 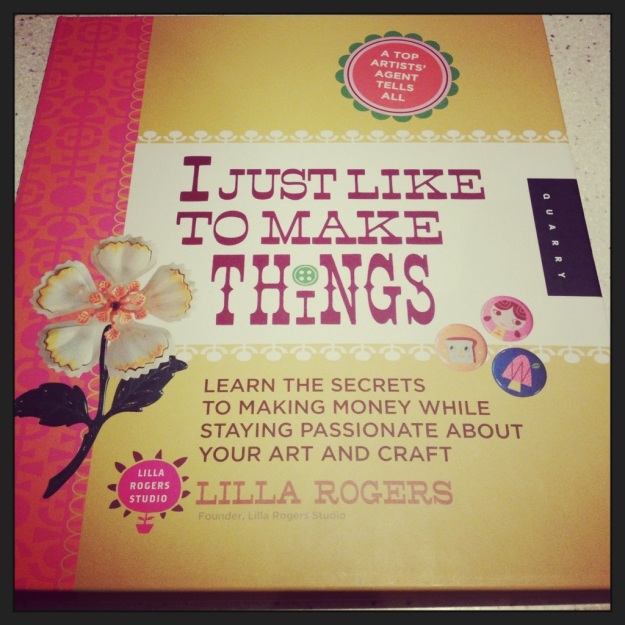 This book was featured in the latest edition of Mollie Makes and I wanted it as soon as I saw it. The quirky title and intriguing concept got me straight away – and on top of that, I’m a sucker for a pretty cover design.

It seems to cover that fear that anyone who gets into crafting as a business must have – will I still enjoy it if I’m not just doing it for fun?

I’ll let you know my thoughts on the book once I’ve delved a little deeper.

Tonight I finished off my latest commission – two gifts for two sisters. The idea was to use different colours than my usual shades and I think the two coordinate quite nicely with purples, marines and turquoise in various shades. 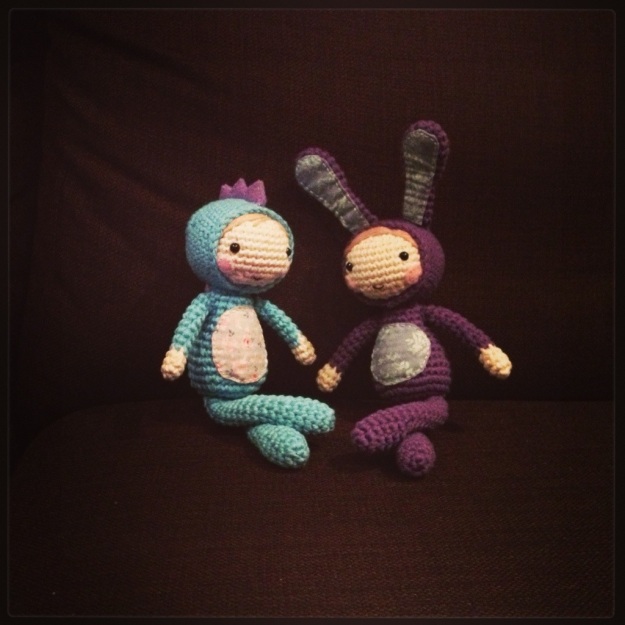 As I blogged earlier this week, I used Schoeller and Stahl Record 210 cotton rather than my usual Rico Creative Cotton. But I found quite a big difference between the shades – the purple was smooth and soft to handle, but the turquoise felt stiffer and less smooth and was somehow less flexible. I’ve never experienced such a big difference between shades of one type of yarn, but it was still manageable and I love the colours. I’m definitely going to order some more of it in a few other colours.

I have three more commissions currently on my list – all of which will be new designs in some form or other, so I’m looking forward to getting stuck into those – there’s something hugely satisfying about creating something completely from scratch, something unique – a real one-off. I also have a project to complete by the end of the month for a magazine – my first published pattern – so some serious time needs to be set aside for perfecting that too. Plenty to keep me busy…

Last night I got started on the second half of my current commission – a little dinosaur child to go with the purple bunny I finished yesterday.

I’m doing it in vaguely coordinated colours so that they look like they belong together. And I’m using Schoeller and Stahl cotton again. I really love the colours and the way the shades have very slight variation within them… it’s very subtle but makes for a softer and more delicate look I think.

When it comes to making the body over the next couple of days, I want to find some way to embellish it with fabric a bit rather than just crochet all the way. Maybe it’ll end up being a spotty dinosaur outfit? We’ll see.